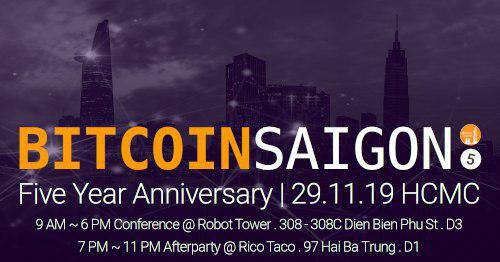 Bitcoin Saigon community is celebrating it’s five year anniversary - and many special guests from all across Asia are flying in to celebrate with us!

The event will consist out of a One-Day Seminar - followed by an Afterparty to mingle with our guests at a special venue.

The preliminary schedule (all speakers are confirmed - talk titles and time table might get adjusted):

10:00 AM Intro to the event by Organizer team

10:40 AM “Importance of data and media literacy in the Crypto World” by Koji Higashi (Coin & Peace)

15:30 “Building on bitcoin: An Intro to Liquid” by Richard Bensberg (Blockstream)