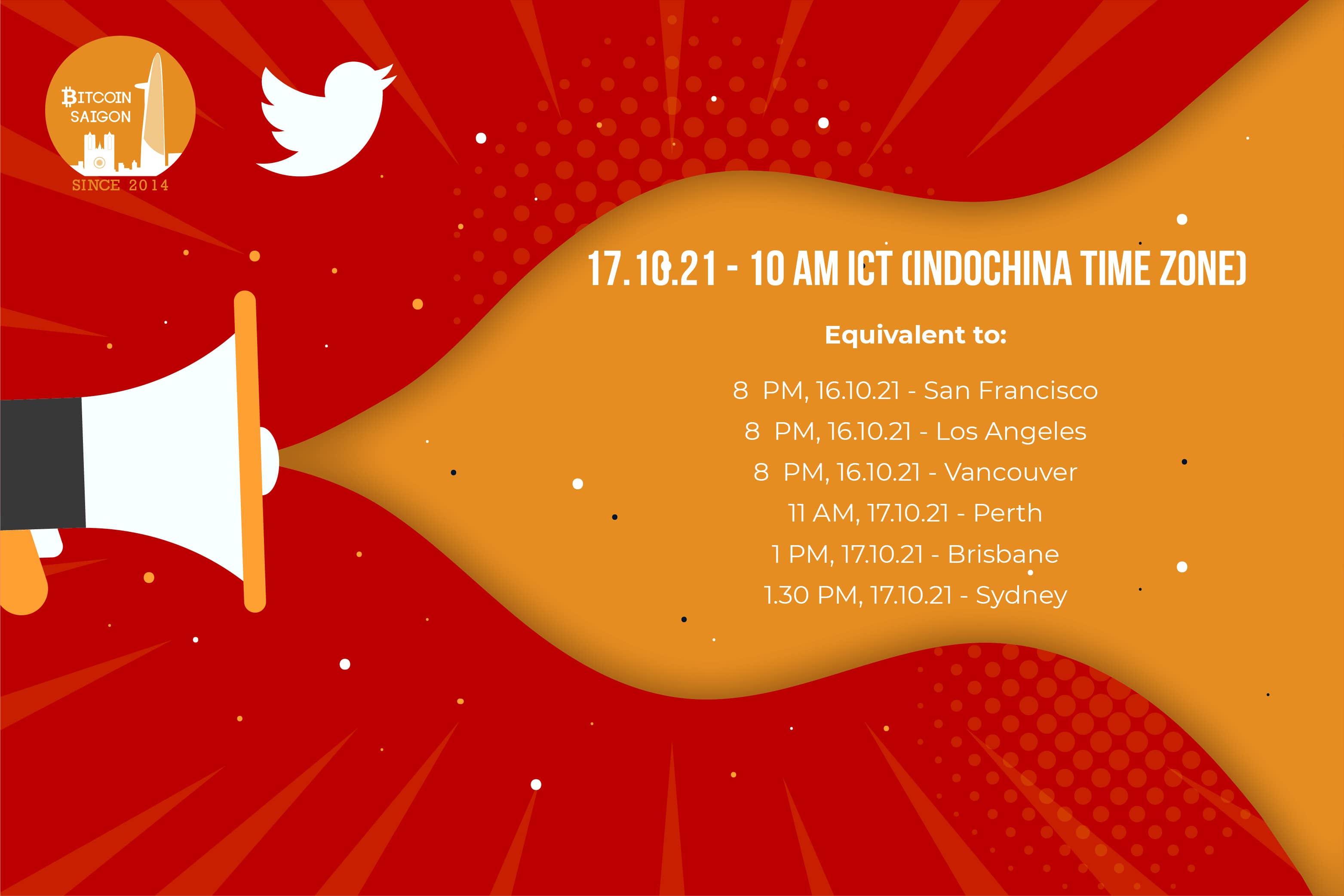 While physical meetups had to be abandoned for the longest time in 2021 (with a resumption looming closely on the horizon), if you are looking for a casual chat with the Bitcoiner crew in Saigon, mark your calendar:

The upcoming Twitter Spaces is co-hosted Lukas; a Swedish Bitcoiner, self-described Timechain Maximalist and one of the main organisers of the recent Global Bitcoin Fest. Lukas himself is currently based out of Saigon.

Bitcoin Saigon: Hello Lukas! You have recently become a serial host on Twitter Spaces - with the biggest event quite probably the “Global Bitcoin Fest”, a 24h Twitter Spaces with participants from all around the world on the occasion of the introduction of the Bitcoin Law in El Salvador. What makes Twitter Spaces such a compelling platform for you?

Lukas: Hello Bitcoin Saigon! Twitter Spaces is similar to Clubhouse on the surface but on an experiential level it’s much more interactive. Everyone is able to comment on the ongoing conversations via emoticons in real time. It’s easy to request the mic and come up and speak, that way the platform invites for less distance between speakers and audience and conversations often take the form of real and unpredictable conversations rather than a sterile influencer circle jerk. Also, it’s an unbeatable orange pilling tool.

Bitcoin Saigon: What was your “orange pill” moment when it really clicked for you? And what were some of your best/worst experiences along the way so far?

Lukas: I sold my company in spring 2020 and had to figure out how to allocate the capital. Over a period of 6 months I looked deeply into every major asset class with the intention of finding a good mix of assets. My goal was to allocate and then move on to building my next company without worrying about constantly managing my portfolio. After 6 months of intense research I came to the conclusion that no mix of assets could satisfy my goal state of a fully passive allocation. I think it was that eventual realisation that opened me up to seriously exploring bitcoin. About the same time Michael Saylor did his first aggressive balance sheet allocation to bitcoin. Michael’s ballsy move and the fact that bitcoin was the only asset I hadn’t yet managed to disqualify, propelled me to go deep into the rabbit hole. I was already >50% allocated into bitcoin by the time I started hanging in Twitter Spaces in April 2021, but Twitter Spaces helped me build conviction on turbo and fully cement my position as a bitcoin maximalist.

Bitcoin Saigon: You have moved to Vietnam yourself a while back and had to suffer through the extremely harsh lockdowns of 2021. What made you move to Vietnam initially, how is the situation now and what do you expect from this rising star in South East Asia?

Lukas: I was actually considering a move to Hong Kong, but the situation there was so turbulent that after a final checkup in November 2019 I gave up. Instead I hopped on a plane to Saigon with no other intention than to explore the tech scene here before I went back to Sweden to spend Christmas with family. Already after my first day in Saigon it was obvious to me that I wanted to spend much more time here, I felt connected with the place and I love the people, the pulse and the amazing vegan food. Over the first year my conviction in Vietnam as a rising star only grew stronger by the day. Unfortunately, the very aggressive lockdown measures in the past few months and the adoption of strict vaccine passport mandates have forced me to re-evaluate. I am now on the fence. I believe that places like the Nordic countries that have embraced a freedom approach will show outstanding economic growth in the coming years while places that choose to go down the path of increasing covid restrictions will suffer enormously. Vietnam has an important choice to make.

Bitcoin Saigon: What can participants and listeners expect from the upcoming Twitter Spaces session with the Bitcoin Community in Saigon?

Lukas: Vietnam was recently ranked as the country in the world with the highest adoption of cryptocurrency. That spiked the interest of many people internationally and many would love to learn more about the reality on the ground and to hear the Bitcoin Saigon community debate these topics amongst each other. I had a taste of this at the “Bitcoin in Vietnam” session at the Global Bitcoin Fest, I learned a lot from the super insightful Bitcoin Saigon locals and I was impressed by the quality of the community. But it was way too short to make a proper deep dive, I hope that this can be that deep dive.

If you are looking to listen in or participate, follow Bitcoin Saigon or head organizer lukas on Twitter for more updated information!