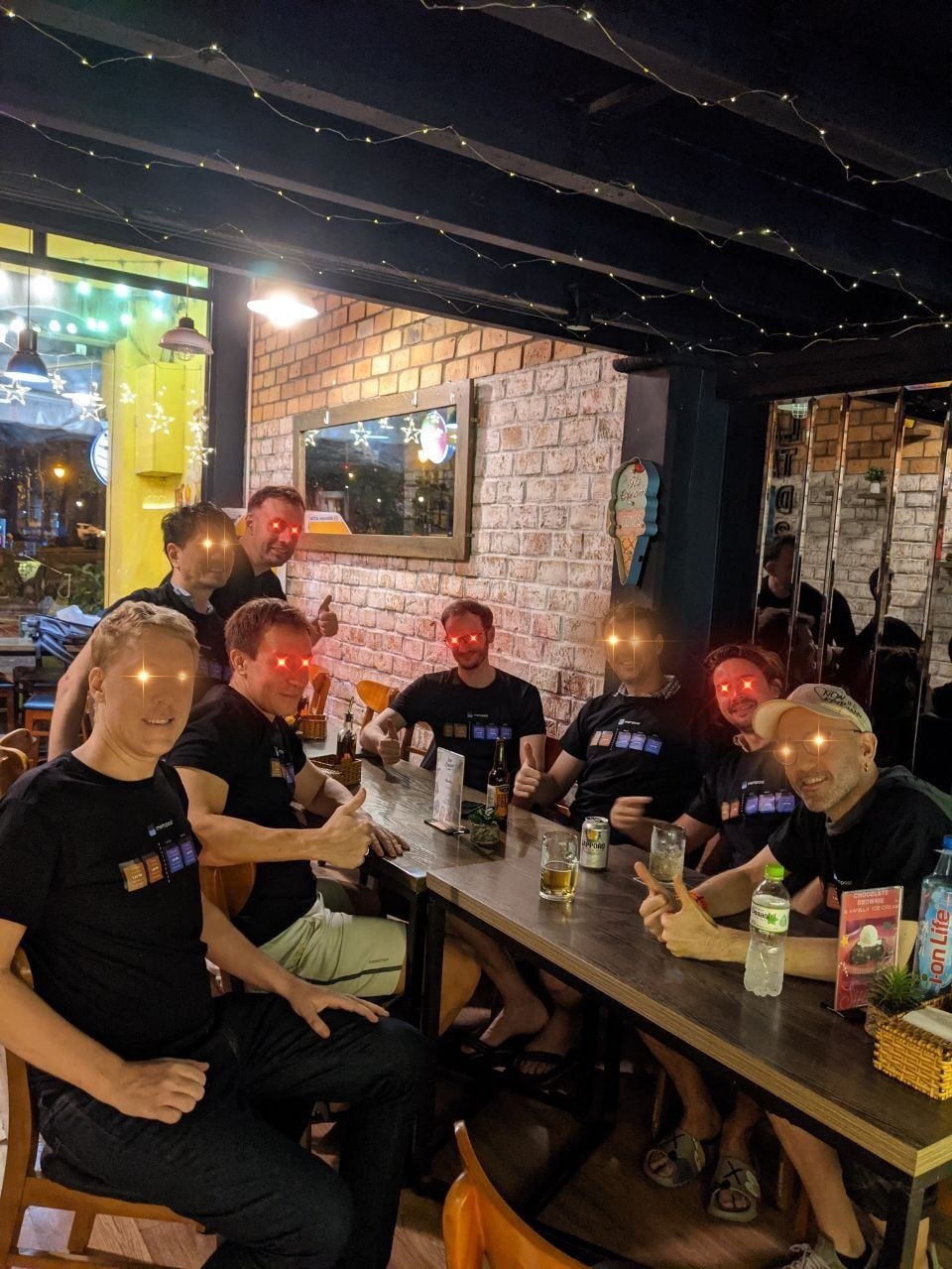 If you have attended any of the recent Bitcoin meetups in Saigon, you most likely had also the chance to meet and converse with Simon, who has dedicated his time now since a few years to build the Open Source Block Explorer Mempool.space.

Simon has over the past year contributed greatly with his insights and expertise around the Bitcoin Network to the growth of shared knowledge among the local Bitcoin community in Saigon.

While Simon has left Vietnam now to go onto the next leg of his nomadic journey, we still took the chance to have a few more words with him - on Bitcoin, Vietnam and where he sees the major opportunities in the upcoming decade!

Bitcoin Saigon: Hey Simon! The usual opener question: When and how did you learn about Bitcoin - and what made it “click” for you that you decided to dedicate your career to it?

Simon: I learned about Bitcoin from a friend back in 2013 but I never took the time to research deeply which made me reject it and forget about it for several years. It wasn’t until 2016 when I started hearing about it again, and 2017 when I took the time of actually digging deep to build an understanding, and since then I have been completely hooked which led me to wanting to work on Bitcoin related projects ever since.

Bitcoin Saigon: In 2018 you launched the Open Source Blockchain Explorer project Mempool.space. What was the motivation to launch the project, what were some of the major challenges you had to overcome and which milestones were achieved?

Simon: The motivation came from the idea of creating something that visualizes the Bitcoin blockchain like blocks getting added to the blockchain, making it so aesthetically pleasing that you want to put it on a monitor on the wall, which is the reason why there has been a “TV view” option since the beginning.

The biggest challenge was finding a performant backend software that made transaction lookups faster to scale up the site.

Bitcoin Saigon: Over the past year the amount of sponsors in the Bitcoin Community backing the Mempool.space project has grown tremendously. Recently you fetched not only a sponsorship from Vietnam’s local Bitcoin Exchange VBTC, but even from Twitter & Square CEO Jack Dorsey. Are you happy with the support so far received by the Bitcoin community and what are some of the items you would like to tackle to put the project on a long-term sustainable financial footing?

Simon: I am overwhelmed by the amount of sponsorships and grants which really took me by surprise. I was even sceptical of adding a sponsorship program at all in the beginning since I didn’t think anyone would sponsor anyway. It was just a free and open source side project of mine with no intention of monetization, but now me and Wiz are able to continue work on the project full time and invest in more powerful hosting infrastructure providing this service for the benefit of the Bitcoin community.

Bitcoin Saigon: What’s up next for Mempool.space and how do you see the project evolving in the coming years?

Simon: The past year has been all about making the Mempool website into the best blockchain explorer and transaction tracker. The biggest things coming up are more focus on the upper layers of the Bitcoin network. The vision is to be an explorer for the whole growing ecosystem around Bitcoin and currently Liquid and Lightning are the biggest ones. A Lightning dashboard and explorer is the next big step, and of course at the same time making it work on people’s own node devices at home.

Bitcoin Saigon: What’s your general outlook on the general development of the Bitcoin transaction fee market and what trends should we expect to happen within the next couple of years?

Simon: It is starting to become clear that the Bitcoin mempool is probably always going to be full. The lowest 1 satoshi per byte transaction will not be able to be confirmed anymore and people will need to adapt to this, and we are trying to do what we can to help people navigate this new environment. As fees are constantly higher there is a need for Bitcoin-services to optimize their use of the blockchain more, and users need to change their behavior as well, by for example move more funds to a Lightning-wallet and start pushing Bitcoin-services to adopt it. Higher fees will push for more optimization, better use of the block space, and move the coffee-payments to layer 2 networks, which is a good thing.

Bitcoin Saigon: Any specific words on the Lightning Network and it’s pro’s and con’s?

Simon: Lightning is great with its possibilities for near-instant and near-free transactions which blows all other altcoins focusing on payments out of the water. It makes Bitcoin-payments truly peer-2-peer and it is more anonymous. The challenges with Lightning is that it still relies on on-chain transactions which may cause it to be expensive to start using in a decentralised non-custodial way. Managing incoming and outgoing liquidity is just too complex for a regular user that expects sending and receiving payments to “just work”. Due to this I believe custodial or hybrid custodial/non-custodial will be the way most people will interact with Lightning for now.

Bitcoin Saigon: Any specific words on the Liquid Sidechain and it’s pro’s and con’s?

Simon: Liquid is another great way of moving load from the main chain. Liquid is more trust based and not as secure as the base layer, but it can be used to move bitcoin faster, cheaper, more anonymous and with more smart contracting capabilities. A big use case for altcoins is the possibility for tokens like stablecoins, but I believe Liquid should take over this role completely. Liquid is a separate blockchain but without it’s own shitcoin, the main coin is just pegged bitcoin.

Bitcoin Saigon: You have spent now close to a year in Vietnam and a majority of the time as an active community member in Saigon. What’s your impression of the country itself as well as the developments in terms of Bitcoin adoption and innovation in Vietnam?

Simon: Vietnam is a big and versatile and beautiful country currently undergoing rapid economic development. What hit me was the entrepreneurial spirit of the people and economic freedom. I didn’t notice any particularly big adoption of Bitcoin in Vietnam (apart from the splendid VBTC exchange), but instead it’s like a hidden gem where bitcoiners currently can live and thrive in. I just hope that Vietnam stays open for Bitcoin innovation as it will benefit its people in the long term, just as it will benefit people all over the world that get exposed to sound money.

Bitcoin Saigon: For what type of Bitcoin & Digital nomads would you recommend Vietnam as a possible more long-term destination?

Simon: After travelling and living in many countries I can say that Vietnam is an amazing alternative for everyone including travellers, nomads and long term residents. With easy visas, affordable living, economic freedom and so many cities and places to stay in or visit it is absolutely a good long-term destination.

Bitcoin Saigon: During your nomad journeys in recent years - which city or country surprised you especially positive?

Simon: Touch question! Most countries and cities that differ the most from the western Europe have surprised me positively. There is really something special to the South East Asian countries due to the quality of life for a westerner living there. Both places like the super modern Singapore to spiritual Bali in Indonesia have made me want to continue going back to these places regularly. I still have many places yet to discover in Vietnam.

Bitcoin Saigon: You are now leaving Vietnam now for Bitcoin 2021 in Miami; the largest annual Bitcoin Conference organized by the team of Bitcoin Magazine. While the current international situation makes travel hard - why do you think a Bitcoiner who has the possibility to join in should make its way to Miami?

Simon: Well, I have never been to Miami or the previous Bitcoin conferences in the US so I have no idea what to expect. But I expect it to be a blast considering so many famous bitcoiners are joining and are able to hangout for a few days. It is always fantastic to hang out with likeminded people so going to a Bitcoin conference is highly recommended. Maybe we can have the big $100K party over there even.

Simon: My advice would be to realize that the world is changing fast and old preconceptions do not apply anymore. It is important to form a global mindset and find opportunities as they may arise. Accumulating bitcoins should of course be the highest priority as it is the key to escape the fiat hamster wheel enslavement. It will never be too late as bitcoin doesn’t have a top due to fiat having no bottom.

Bitcoin Saigon: Thank you Simon for your time and all your contributions to the Bitcoin Community in Saigon as well as globally! We hope to welcome you back in Vietnam soon! :)

If you like what the Mempool.space team is doing and become a sponsor on your own - you can do so here!