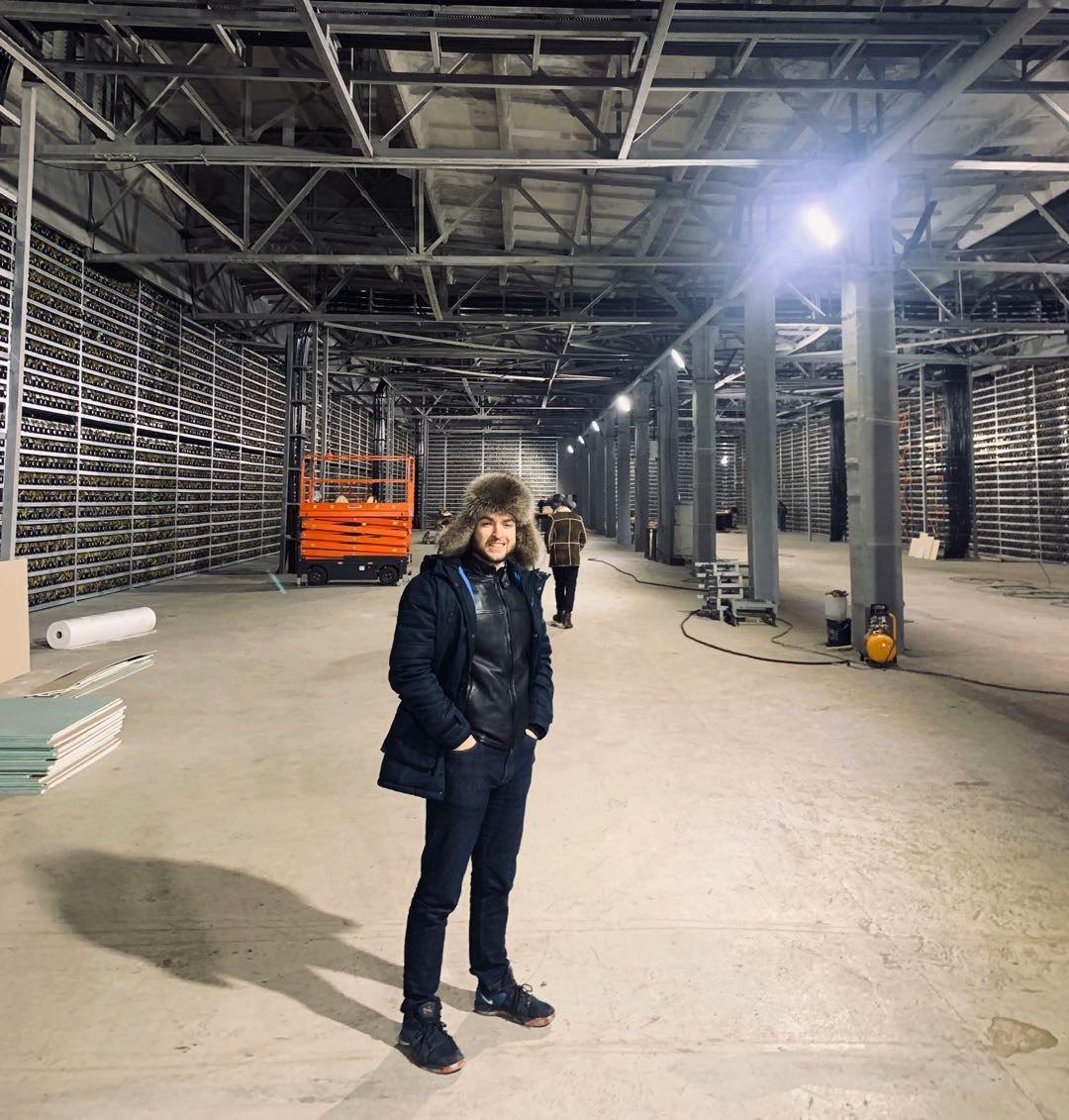 Ahead of our next Online Meetup on 29.05.2020 we had the chance to catch with Thomas Heller who is serving as Global Business Director for F2Pool, which is as of Mid-May 2020 the World’s largest Bitcoin mining pool by Hashrate.

F2Pool wrote this month - literally - a small piece of Bitcoin history when it mined the last Bitcoin Block of “Reward Era 3” with a block subsidy of 12,5 BTC/Block and encoded - reminiscent to Satoshi’s call to arms in the Genesis Block - the message “NYTimes 09/Apr/2020 With $2.3T Injection, Fed’s Plan Far Exceeds 2008 Rescue” to remind future generations in what a turbulent, chaotic time Bitcoin came about and grew up.

Thomas will be participating alongside Steve Barbour of Upstreamdata (an interview with Steve we conducted ahead of his presence at the CryptoEcon Conference in Hanoi can be found here.) in our upcoming Miner-focused Online meetup on 29.05.2020.

Q1: Hello Thomas! Thank you for taking the time ahead of our upcoming Online Meetup session to speak with us! Our standard opener question: When and how did you hear the first time about Bitcoin and when was the moment, that you got convinced that this might be a good next move in your career?

Thomas: August 22, 2017. I had just moved to Beijing after a few years living abroad, catching up for a coffee with an old friend. She mentioned Bitcoin and “hard forks” which had me zoning out. But… She then pulled out her Android phone and showed me how easy it was to connect Alipay to Huobi and buy some Bitcoin. Looking back, there was still quite a bit of friction, but compared to the international money transfers of the traditional banking system that I was used to, I could already see huge potential. The first few weeks saw me take advantage of arbitrage opportunities in the Bitcoin price between Australia and China, and go deep down the rabbit hole over the following months, trying to learn as much as possible.

Actually getting involved in the industry actually came by chance. Curiosity, networking, and luck had me introduced to F2Pool co-founder Wang Chun during 2018. We became friends and then later that year he asked me if I would be interested to join F2Pool.

Q2: Since 2018 you took up the role as Global Business Director at F2Pool, which is currently measured by Hashrate the largest Bitcoin mining company in the world. How did that came about and what were some of the most exciting achievements during your tenure up to this point? And what plans has F2Pool for 2020 and beyond?

Thomas: (mentioned above how I became friends with Chun and joined F2Pool) When I first joined F2Pool at the end of 2018, I really didn’t know much about mining at all. The first few weeks and months felt the same as when I first discovered Bitcoin, that warm fuzzy feeling trying to learn as much as I could as quickly possible for a multitude of mining topics - the players, the economics, the value chain, and the technology behind it all.

On a personal level, building a small, high-functioning team, as well as the opportunity to travel to many countries to meet many of our miners at their mining farms was a big highlight for me. Understanding your customer deeply is the most important pillar of providing a high level of service to your customers. At the company level, going from a 10% Bitcoin hashrate market share with around 3 EH/s, to 20% market share with around 22 EH/s, while supporting 50 other PoW in just over one year was pretty spectacular. Apart from that, being lucky enough to mine block 629,999, the last block of the 12.5 BTC block reward was pretty special.

For 2020 and beyond, we will just continue to consolidate by building new features for our miners (recently a SHA256 profit-switching pool) to help them improve the profitability of their mining operations and also to make them easier to manage. We recently launched a SHA256 profit-switching pool which intelligently switches between BTC, BCH, and BSV to mine the most profitable coin at a given time. We are also launching a new content platform so that we can raise the awareness of Bitcoin and Bitcoin mining so that people can understand it better and safely enter the industry. This is important to ensure we keep seeing the industry grow.

Q3: A recent report highlighted that about 65% of Bitcoin’s mining hashrate is located in Mainland China. When you entered this world professionally - what were some of the facts you learned about this part of the industry which took you by surprise or astonished you?

Thomas: Every time I walk into a Bitcoin mining farm (data center) I am just in awe of what’s going on. I’ve visited farms with tens of thousands of machines running, all mining Bitcoin. I love how anybody in the world can join the ecosystem, whether it’s by owning some Bitcoin, running a full node, run some mining machines, or develop applications on top of the Bitcoin protocol.

Although it’s a global game, it still surprises me how easy it is to collaborate with anybody in the industry. One great thing about the Bitcoin community is that it’s very welcoming, I’ve met Bitcoiners in every country I have ever visited, and all of the Bitcoin or mining companies I’ve come across are very willing to find ways to collaborate.

Q4: When F2Pool mined the other week the last Block of “Reward Era 3” the message “NYTimes 09/Apr/2020 With $2.3T Injection, Fed’s Plan Far Exceeds 2008 Rescue” was encoded into its Coinbase data. What’s the story behind that?

Thomas: It was a very special moment for our team and I never expected it to get such a huge response. Earlier this year, our co-founder, Wang Chun suggested that he would like to add a message within the halving block and asked us to come up with ideas. We decided on this message as it’s a reminder of why we were all here, and a tribute to the Genesis block: “The Times 03/Jan/2009 Chancellor on brink of second bailout for banks”. Bitcoin is a revolutionary change to the traditional financial system and we don’t want to forget why we are here.
For the halving event we actually hosted a live stream, starting at block 629,995. As we have 20% of the Bitcoin network hashrate and a 1 in 5 chance of mining a particular block, I couldn’t believe my eyes when we mined 995, 996, and then 997. After 998 I thought our luck had run out, but thankfully we managed to get block 629,999. This was the only block we entered that message in, so it was such as relief that we were able to mine it and were able to share our message with the world.

Q5: You “got stuck” in Vietnam after attending the CryptoEcon in Hanoi earlier this year. Probably not the worst that could happen given that Vietnam seemed to have handled the whole situation around the Coronavirus relatively well. What’s your impression of Vietnam and the cities/regions you visited and what you believe holds the future for this country in the midst of South-East Asia?

Thomas: Actually I feel really lucky. I’ve always liked Vietnam, the country is beautiful, the people are nice and the food is great! And as you said, Vietnam has been a very safe place to stay during the Coronavirus pandemic.

I can also feel a huge amount of energy in Vietnam, lots of development, and lots of tech startups. The trade war between China and the USA puts Vietnam in an interesting place, even for the mining side. Although electricity is not cheap here, there may be opportunities for the ASIC mining machine manufacturers to set up factories here. Bitmain set up a factory in Malaysia which helps them minimize tariffs when selling miners into the USA. Other manufacturers are exploring the option of setting up a factory in Thailand or Vietnam to also get that competitive edge.

I’m excited to see how Vietnam develops over the next 5-10 years and I am hoping to spend a lot more time here.

Q6: You attended the CryptoEcon 2020 in Hanoi earlier this year. What sparked your specific interest to join in at CryptoEcon2020 and what role may a deeper understanding of these economics-focused concepts presented there play for Bitcoin business such as F2Pool in the wider realm of the overall Bitcoin ecosystem?

Thomas: Could you imagine my surprise when I saw an event targeted at 3 things in love, planned for the next day? Bitcoin, Vietnam, and motorbikes. I have my Kawasaki ER6N waiting for me in Beijing which I miss dearly. So there was no way I would not attend - I was sure I would meet some cool people there. And it was great, the venue was awesome, the talks were interesting and I even managed to pick up a copy of the book Cryptoeconomics by Eric Voskuil which has been a great read.

Q7: Bitcoin is now going in its second decade of existence. After taking the world’s attention by storm in the first ten years, where do you see Bitcoin heading next and what developments you are the most excited about? And also: Which developments you see occurring in the Bitcoin mining space in the years ahead and how does Bitcoin mining look like at the end of the decade in your point of view?

For the Bitcoin mining industry, there are a few very interesting developments to watch: 1) hashrate derivatives and other hedging products 2) newer, more powerful ASIC machines 3) cheaper, cleaner sources of power. I believe hashrate contracts are going to be a big thing over the coming 12 months. We have already seen BitOoda broker some deals and FTX recently launch hashrate futures based on network difficulty. These kinds of tools can help miners hedge their risks and scale up their operations. The development of new ASIC machines is a hugely capital intensive and competitive battle and now MicroBT has caught up to Bitmain with their Whatsminer M20 and M30 series. The machines are still using 7nm chips, and the next big jump will be to 5nm. I’m looking forward to seeing how that plays out. Lastly, procuring cheap, safe, and reliable electricity is at the core of any mining operation. We’ve seen a large amount of hashrate in China for the past few years. This will continue, but we will also see more mining farms set up in other countries, such as North America, Kazakhstan, Russia, South America, Africa, and more. It’s a global game and I’m going to be watching the continued geographical decentralization of Bitcoin hashrate, and hopefully play a part in it!